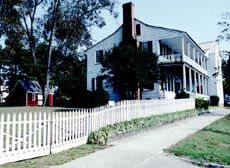 James Iredell was a civil leader during the American Revolution and later became one of the first justices nominated by President George Washington to the U.S. Supreme Court. Join the Historic Edenton Visitor Center on a guided tour of his restored 1773 home, and learn about his life as a Patriot and his leadership as an advocate for American independence in North Carolina.

Where is the activity?